One of the most basic decision factors for light source selection is lifetime: how long will it last? Long life is potentially a key advantage of LEDs over other light sources. However, the lighting industry currently has very limited direct experience with long-term performance and reliability of LED luminaires. This document outlines the issues and provides suggestions for understanding and interpreting LED product life claims.

Background
Lifetimes of traditional light sources (incandescent, fluorescent, and highintensity discharge lamps) are estimated through industry-standard lamp rating procedures. Typically, a large, statistically-significant sample of lamps is operated until 50% have failed; that point, in terms of operating hours, defines “rated life” for that lamp. Based on years of experience with traditional light sources, lighting experts can confidently use lamp life ratings, along with known lumen depreciation curves, to design the lighting for a space, and to determine re-lamping schedules and economic payback. LED technology changes several aspects of this traditional approach:

1. LEDs usually do not fail abruptly like traditional light sources; instead their light output slowly diminishes over time.
2. LEDs are often integrated permanently into the fixture, making their replacement difficult or impossible.
3. LED light sources can have such long lives that life testing and acquiring real application data on long-term reliability becomes problematic—new versions of products are available before current ones can be fully tested.
4. LED light output and useful life are highly dependent on electrical and thermal conditions that are determined by the luminaire and system design

LED luminaires and replacement lamps available today often claim long life, e.g., 50,000 hours or more, which exceeds the life ratings of nearly all other
light sources (except for some electrodeless sources). These claims are based on the estimated lumen depreciation of the LED used in the product and often
do not account for other components or failure modes. Life claims by LED luminaire manufacturers should take into account the whole system, not just the LEDs. One of the key lessons learned from early market introduction of compact fluorescent lamps is that long life claims need to be credible and backed up with appropriate manufacturer warranties.

the decrease in lumen output that occurs as a lamp is operated. For most light sources, the lamp fails before significant lumen depreciation occurs (an outdated exception is mercury vapor lamps). Because LEDs can continue to operate at very low light levels, LED life is usually defined as lumen depreciation to a particular point, such as 70% of initial lumens.

another aspect of LED life projection, used in conjunction with the lumen depreciation (L) metric and a target statistical confidence interval.
B50 indicates no more than 50% of a sample of LED devices would be expected to fail before a certain number of operating hours. Failure means light output drops below a target lumen maintenance level (such as L70 or L50).

For white light LEDs providing general illumination, the definition of useful life is often given as the hours of operation at which the LED’s light output has decreased to 70% of initial output (abbreviated as L70 or L70). The selection of 70% is based on vision research indicating that in general lighting applications, the “typical” human eye does not detect the decrease in light until it exceeds 30%. LED manufacturers publish lumen depreciation curves based on testing of
their products, extrapolating lumen depreciation to the 70% level. Depending on the application, other depreciation levels may be appropriate as end of life limits, such as L50 or L80. LED manufacturers make lumen maintenance projections based on extended in-house testing and statistical extrapolation,
accounting for the effects of drive current and LED junction temperature of the device in operation. For example, Philips publishes curves shown in Figure 1. This graph shows the projected lifetimes (B50, L70 means 50% of the products have at least 70% lumen maintenance for the projected number of operating hours) for
the K2 LED package. According to this graph, 50% of a sample of K2 devices run at 350 mA would be expected to maintain at least 70% of initial lumens for
60,000 hours, if the junction temperature is maintained at about 160C or lower. If the device is run at a higher current, e.g., 700 mA, Tj would have to be kept lower (about 140C) to last 60,000 hours. 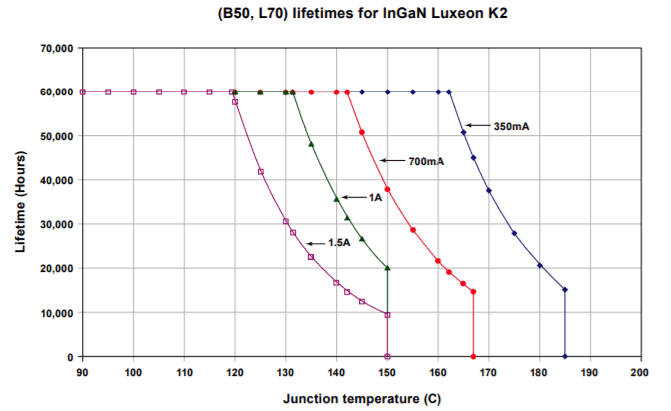 At this time, there is not a standard reporting format for LED lifetime or lumen depreciation curves. A test procedure currently in development by the Illuminating Engineering Society of North America (designated LM-80, IESNA Approved Method for Measuring Lumen Maintenance of LED Light Sources) will provide a common procedure for making lumen maintenance measurements at the LED device, array, or module level

The LM-80 test procedure addresses only one factor in the life of an LED luminaire – lumen depreciation of the LED device over the prescribed test period. When LEDs are installed in a luminaire or system, there are many additional factors that can affect the rate of lumen depreciation or the likelihood of catastrophic failure. These include temperature extremes, humidity, moisture incursion, voltage or current fluctuations, failure of the driver or other electrical components, damage or degradation of the encapsulant material covering the LEDs, damage to the wire bonds that connect the LEDs to the fixture, and degradation of the phosphors. LED performance is directly linked with other components in the luminaire, all critical for understanding product reliability.
Current testing efforts and related research have provided some confidence in the reliability of some components.

However, other characteristics of the technology, interactions, and application remain untested. Many LED luminaires are newly designed products, increasing
the likelihood users will experience unanticipated problems relative to fixtures that have been manufactured and refined for years.
As depicted in Figure 2, LED luminaires are electronic assemblies involving several connection points, components and materials where degradation or failures can take place, in spite of the use of high-quality, durable LEDs. While the lifetime of an LED source is one important indicator of LED luminaire life, it would be misleading to rate the entire LED luminaire based solely on the LED source. There is often a huge gap between the warranted life of a product and the expected life of the LED source in that product. Further, reliability of fixtures that include replaceable LED engines and replaceable components should be assessed differently than reliability of entirely integrated fixtures.

The DOE CALiPER program began reliability testing on SSL luminaires in August 2007. Some luminaires maintain output levels over the first 6,000 hours of operation (7 of 26 products are producing at least 95% of their initial output), while others exhibit rapid lumen depreciation within the first 1,000 to 2,000 hours, and some products exhibit significant color shift over the first 6,000 hours of operation. No generalizable patterns can be observed yet. Figure 3 summarizes lumen depreciation interim testing results for 26 SSL products. The lumen depreciation testing is not completed for these samples, but these interim results already provide insight. The two white lines in the plot are provided as reference curves: the horizontal white line indicates 70% of the initial output, and the descending white curve represents a typical logarithmic decay that would reach L70 at 50,000 hours. 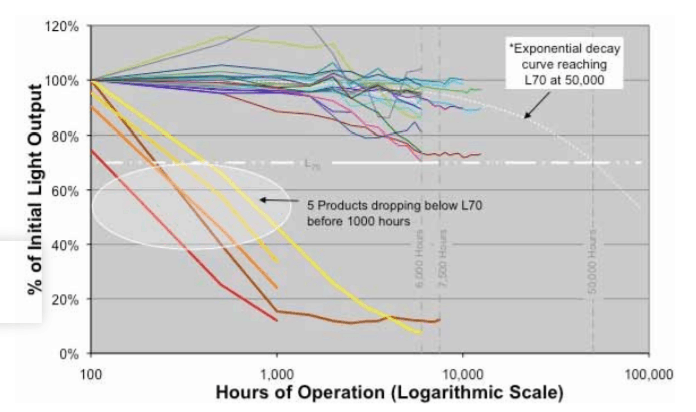 These 26 products cover a range of LED configurations, including task lamps, replacement lamps, retrofit lamps, and outdoor area luminaires. At this point of testing, and given the small sample size, one cannot draw conclusions about the lumen depreciation performance of any particular category of products (based on size or application). The CALiPER program will continue to collect lumen depreciation and chromaticity maintenance data on a range of products, and to make those testing results publicly available.

In summary, LED luminaire life is not identical to estimated LED life. LED luminaire life is also a function of the power supply, operating temperatures, thermal management, materials, and electrical and material interfaces. Definitive lifetime ratings will not be possible until more experience is logged with a wide range of LED luminaires in the field. In the meantime, how can LED luminaire reliability be assessed? Some things to look for:
• Use of high-quality LEDs from manufacturers who publish reliability data.
• Luminaire warranty offered by the manufacturer – should be at least comparable to traditional luminaires used for the application under consideration.
• Luminaire photometric report, based on LM-79-08 test procedure, from an independent testing laboratory.
• Temperature data (for example, board, case, or solder joint temperature) for the LEDs when operated in the luminaire in the intended application; and information about how the measured temperature relates to expected life of the system.
• Any test data available about longer term performance of the LED luminaire, such as DOE CALiPER testing, manufacturer in-house testing, or field tests conducted by DOE, utilities, or other parties.