LED Warehouse lighting has been widely used in the warehouse environment. No matter the big or small warehouse, they all need a lighting to light up the warehouse.

Chapter ONE: The benefits of LED warehouse lighting

The industrial warehouse lighting has a high standard than other indoor lighting because they are installed in very high ceiling. Which makes it is difficult and high cost to replace the lighting when it failed or has issues during the work period.

So choose the right warehouse industrial lighting can save lots of time and cost after installation.

The good quality LED warehouse lighting lifetime last 50,000 or 70,000 hours. But if choose the bad quality industrial lighting, it will need to maintenance the lighting quickly.

The LED high bay warehouse lighting can be available in different wattages to provide all brightness you need from 3ft to 30ft. It doesn’t like the fluorescent high bay, the biggest are just 8-10 lamps and in a very big size.

The LED warehouse lighting are very small compared to fluorescent high bay industrial lighting. It will save your shipping cost, handling cost, storaging cost and installation cost because if the small size.

Lighting uniformity is vital for a warehouse to be productive. Most people tend to overlook the importance of lighting uniformity. Just think about a space that has bright and dim spots. It would make employees feel uncomfortable and would also decrease their productivity level.

You can control the brightness with the dimming function and dimmer.

One of the most significant differences between LED industrial lighting and traditional industrial lights is that they generate less heat. This makes it easier to keep a large facility cool in the summer — yet another way in which LEDs can help lower a business’s overhead costs.

A warehouse is a rugged environment where heavy machines are frequently used. Unlike their incandescent and fluorescent counterparts, LEDs are durable enough because of the compact size to stand up to the abuse of a busy workplace

THE LED industrial high bay can be worked with the intelligent control easily than the fluorescent industrial lighting. You can add the motion sensor and battery backup more easily with less cost than even before.

Lights that are too dim or too harsh will directly affect worker performance. It’s been said implementing brighter lighting, like LEDs, can provide health improvements and increased productivity.

THE LED Linear high bay fixture provides versatility in form and function. With a wide range of lumen packages and accessories available, this luminaire can be
used in many different applications ranging from warehouses and manufacturing facilities to retail outlets and school gymnasiums 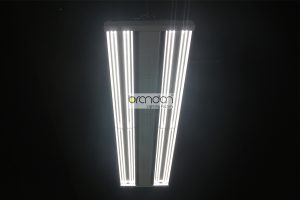 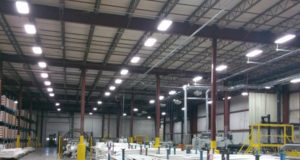 UFO LED High Bay Lights have a dome-shaped skeleton that resembles that of a UFO and boasts LEDs that effectively lights up any place brightly. As of recently, these High Bay LED lights have finally been able to plant their feet in the market and receive the recognition they deserve 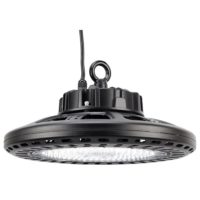 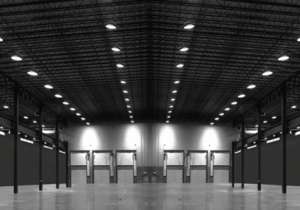 The industrial Linear Vaportight fixture Series offers outstanding value and features long lasting reliability. The product is easy to install, featuring stainless steel clips, tethered LED boards, and multiple mounting options. It is the ideal industrial solution aimed to meet demanding environment needs. The
lens is designed to provide visual comfort while delivering the efficient light output. The HLVT Series is guaranteed to deliver immediate energy savings and low maintenance costs. This easy-to-install vaportight is a low-cost solution rated for wet locations and stands up to the elements with its IP66 rating.

They can be used in widely environment which requires high lumens and waterproof.

The high output design makes the industrial batten strip light very versatile it can be used for many applications. Simple to install and being low voltage it is safe for both indoor and covered outdoor areas. Some suggested applications are under-cabinet lighting, refrigerated display lighting, bar and freezer cabinets, decorative lighting, cove lighting, outdoor pergola lighting and wall washing applications.

The high output LED industrial strip light is the most economical lighting solutions for the warehouse lighting.

Warehouse lighting applications require optimal light levels with good horizontal and vertical uniformity in order to avoid mistakes while reading labels or picking items for shipping. This can increase profits by reducing the costs of customer returns, refunds and expedited shipments caused by shipping the wrong item.

In warehouses and distribution centers, walking or driving forklift trucks represent a high risk if employees cannot see the floor or obstacles properly due to inadequate lighting.

TCP has the LED lighting solutions you need for all industrial solutions, including deck lights, loading dock lighting, and warehouse lighting.

Linear high bay and UFO lights work together with eye-level fixtures like outdoor luminaires and stairwell lights to create a well-lit environment that is safe and pleasant for employees. TCP offers them all, so you can mix and match to suit the needs of your warehouse or industrial space.

Check out our selection of high bay fixtures, both round and linear. These fixtures are quick and easy to install, and are made to last a long time. Lights from feature multi-point design that ensures an even distribution of light. 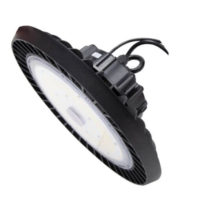 Warehouses are a world of their own – large, windowless halls with high shelving constructions and relatively narrow aisles where workers need to move quickly and safely. Ideal lighting solutions are high-performance and durable luminaires with narrow or narrow-wide distribution reflectors and high levels of glare reduction. Optimum visual conditions must exist when looking up towards the hall ceiling as well, for example when sorting goods at high heights with forklift trucks.

Mirona Fit LED is the perfect lighting solution for challenging industrial surroundings. Thanks to its wide range of versions it is suitable for e.g. use in warehouses and distribution halls and the heavy industry and foodstuff industry, and emits reliable, uniform, glare-free light. 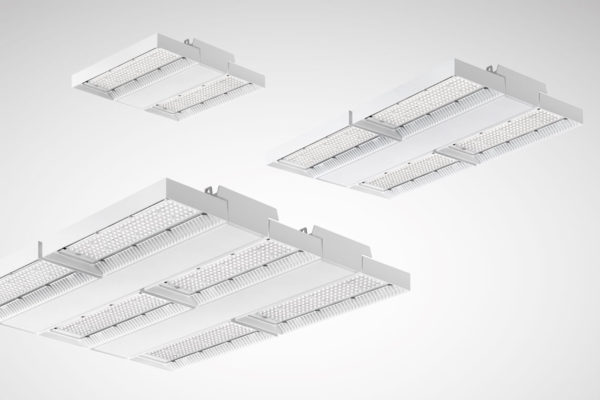 Industrial facilities need high quality warehouse lighting to keep workers safe and factories productive. Lighting solutions not only need to be durable enough to withstand harsh environmental conditions, including high temperatures, humidity, corrosive atmosphere, dirty power, and vibration, but also must comply with
applicable fire, safety, and material codes. In addition to these requirements, the luminaires should require only minimal maintenance and be energy efficient.

Because of recent advances in LED technology, industrial facility managers now have other options than just the traditional high intensity discharge (HID)
lamps of yesterday, and can achieve substantial savings in energy and lighting maintenance LED. Today’s LED systems use 2–3 times less energy and
require up to 90% less maintenance compared with traditional Metal Halide and High Pressure Sodium High-intensity discharge lamps—bringing lighting
to the forefront of sustainability and cost reduction initiatives. Factories and plants are upgrading mission critical lighting applications to achieve rapid payback on investment with significantly better light quality and control. This white paper describes the major lighting applications within the Industrial sectors and key points to consider when upgrading to LED lighting.

1)Maintained Illumination: Illumination, measured in lux or foot candles, is the measure of the amount of light that falls onto a surface. The level of illumination required depends on the task being performed. Organizations like OSHA and IESNA recommend minimum lighting levels for performing specific tasks based on the frequency of activity and the inherent danger present. ‘Maintained’ refers to light level from a luminaire not at the beginning of its life,
but rather at the end of its life; therefore light decay must be factored into the equation when calculating minimum illumination. It has been proven time
and again that accidents and productivity can be directly linked to adequate lighting, and therefore, it is imperative to provide a minimum level of maintained lumens. Since LED warehouse luminaires do not have replaceable ‘lamps’, the maintained lumens are calculated at the end of its life.

2) Control Systems: The instant dimming and turn on-off capabilities of modern day LED systems allow for a more efficient utilization of electricity, not possible with HID lamps. In addition to standard analog dimming, lighting can be made adaptive to the environment based on foot or vehicle traffic via occupancy sensors, daylight using photocells or timers, and peak electricity costs utilizing advanced lighting controls. These controls use wireless or power line communication, and can also provide facilities managers with real time usage and maintenance data. Resilient luminaires are compatible with wired and wireless control methods depending on the specific need of the facility.

4) Color Rendering: Color rendering is the ability of a light source to represent the true colors of an object, and the Color Rendering Index (CRI) is a scale that measures this ability. A CRI of a 100 indicates that a light represents color perfectly (sunlight represents a CRI of 100). In food and beverage processing facilities, a high CRI light sources allows workers to see colors accurately and perform their jobs safely and correctly. Most importantly, high CRI light sources allow workers to discern the quality of food products in processing and inspection areas, impacting the safety of the food. In general food processing areas, a CRI of 70 is desired, whereas in inspection areas, a CRI of at least 85 is required

5) Dirty Power: Voltage and current fluctuations in the power line are a known problem in heavy industrial settings. Large temporary surges in power can
be caused by lightning storms, but more often the facilities are impacted by smaller, dirtier surges from load switching, and the use of low power factor
devices. Constant dirty power use over time will lead to premature lighting failures. Resilient’s power solutions counteract and guard against this at the individual luminaire level by utilizing proprietary protective circuits to defend against various types of dirty power.

6) Light Penetration: Luminaires in heavy industrial sites are often hung at near ceilings exceeding 30 meters high and require at least 750 to 1000 lux in
moulding, smelting and plating areas. In addition, the particulates in the air can accumulate on the luminaire lens exacerbating the need for powerful light output to penetrate to the facility work areas. Light fixtures in such areas should utilize long throw optics to reach the work floor, and a luminaire dirt depreciation factor of 0.65 should be used to calculate the level of light output and the number of luminaires needed to illuminate the workspace.

Using the lighting intelligent controls will bring lots of benefits to warehouse lighting application. These benefits include improved energy efficiency and responsible power use, increased security and safety, and responsive controls.

The control requirements and devices are: 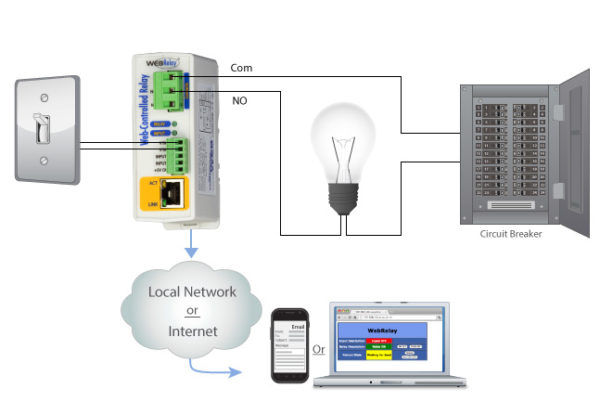 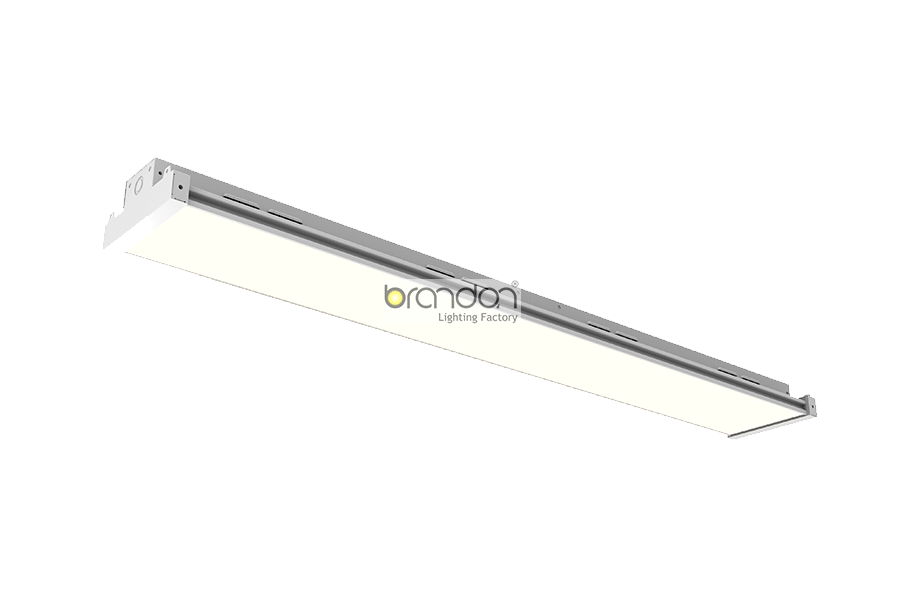 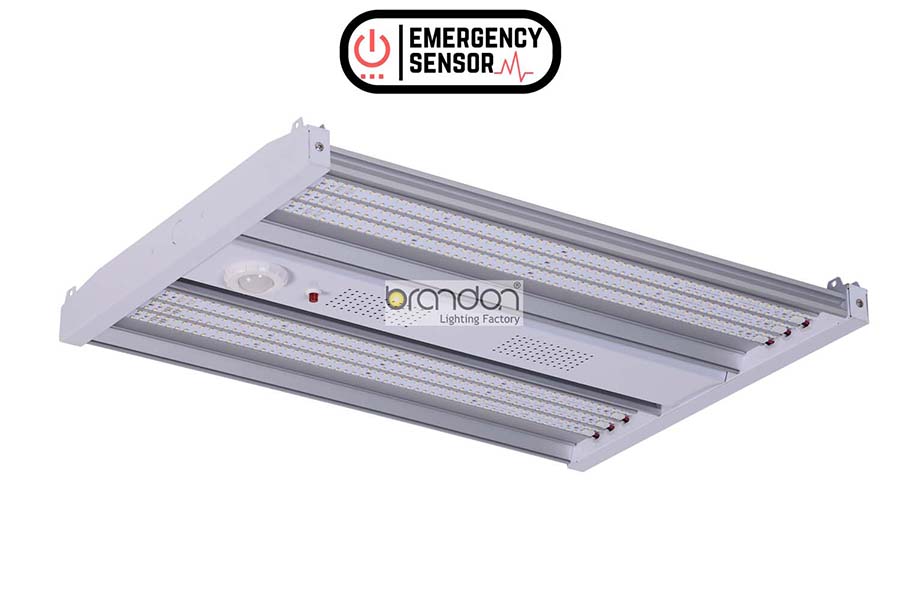 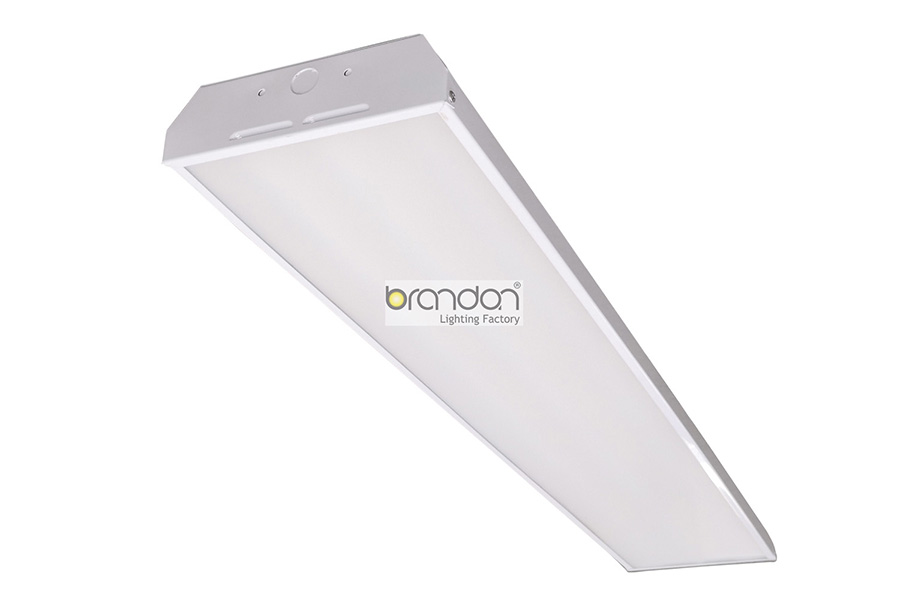 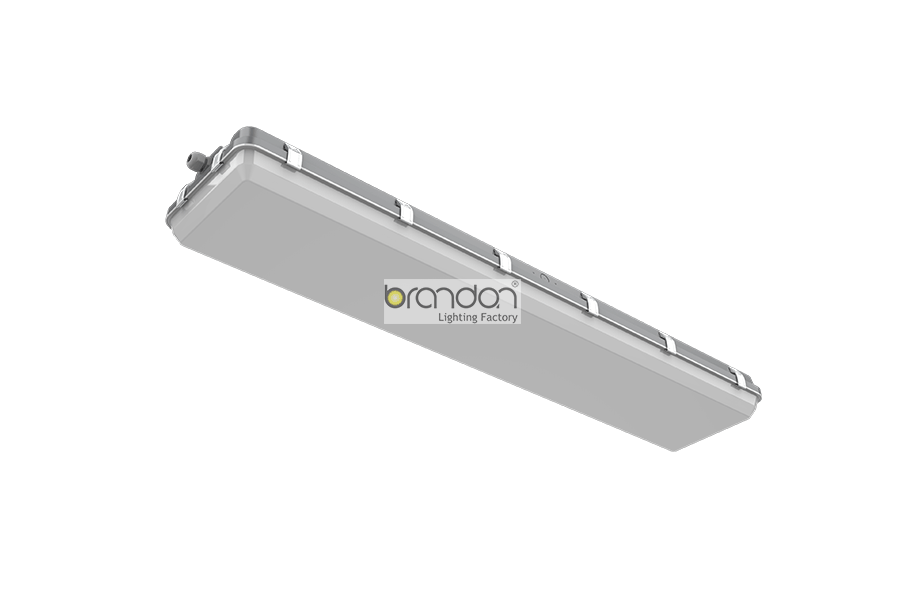 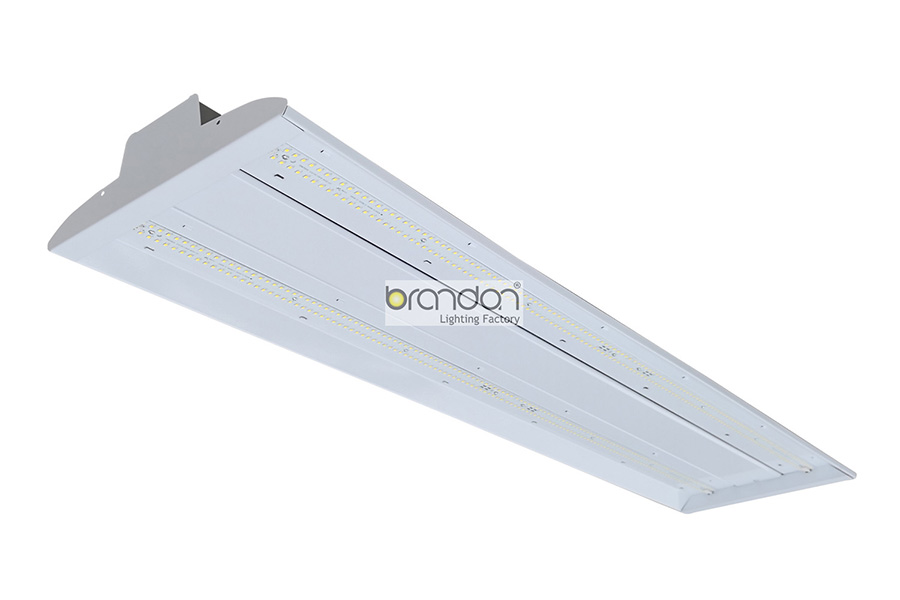