Light-emitting diodes (LEDs), a type of solid-state lighting (SSL), are revolutionizing the lighting market. LEDs have surpassed many conventional lighting technologies in terms of energy efficiency, lifetime, versatility, and color quality, and due to their increasing cost competitiveness LEDs are beginning to successfully compete in a variety of lighting applications. The Department of Energy’s (DOE) 2014 study, Energy Savings Forecast of Solid-State Lighting in General Illumination Applications, (hereafter referred to as the DOE SSL Forecast) forecasts that LED lighting will represent 84% of all lighting sales by 2030, resulting in an annual primary energy savings of 3.0 quadrillion British thermal units (quads).

Since 2003, the DOE SSL Program has evaluated the United States (U.S.) lighting market to report on lighting applications where LEDs are having the greatest energy savings impact. The 2015 Estimated Adoption of LEDs in Common Lighting Applications report provides an update to the 2013 analysis2 and represents the fifth iteration of this analysis (titled the Energy Savings Estimates of LEDs in Niche Lighting Applications prior to 20133). The 2015 report investigates the current adoption and resulting energy savings of LEDs in 10 common white-light applications, shown in Table 1.1. The 10 lighting applications selected for this study include: A-type, decorative, directional, small directional (MR16), linear LED light fixtures, low/high bay, parking lot, parking garage, area/roadway, and building exterior. An “other” applications category was included to accommodate lighting products that account for less common LED products and those that occupy unknown applications. The penetration and energy savings resulting from these other applications are included in the overall analysis, but they are not discussed in the report.

Since the designs of LED lighting products vary significantly, products installed in each of the analyzed applications are classified as LED lamp replacements or luminaires. In some applications both LED lamps and luminaires are competing for market share, while in some there is only one product type. Typically LED lamps are designed to be direct replacements for existing incandescent and halogen lamps, while LED luminaires represent a holistic change-out of the existing lamp and fixture system. Table 1.1 indicates which LED product types (lamps and/or luminaires) are analyzed within each of the applications, provides a description, and includes example LED product images. 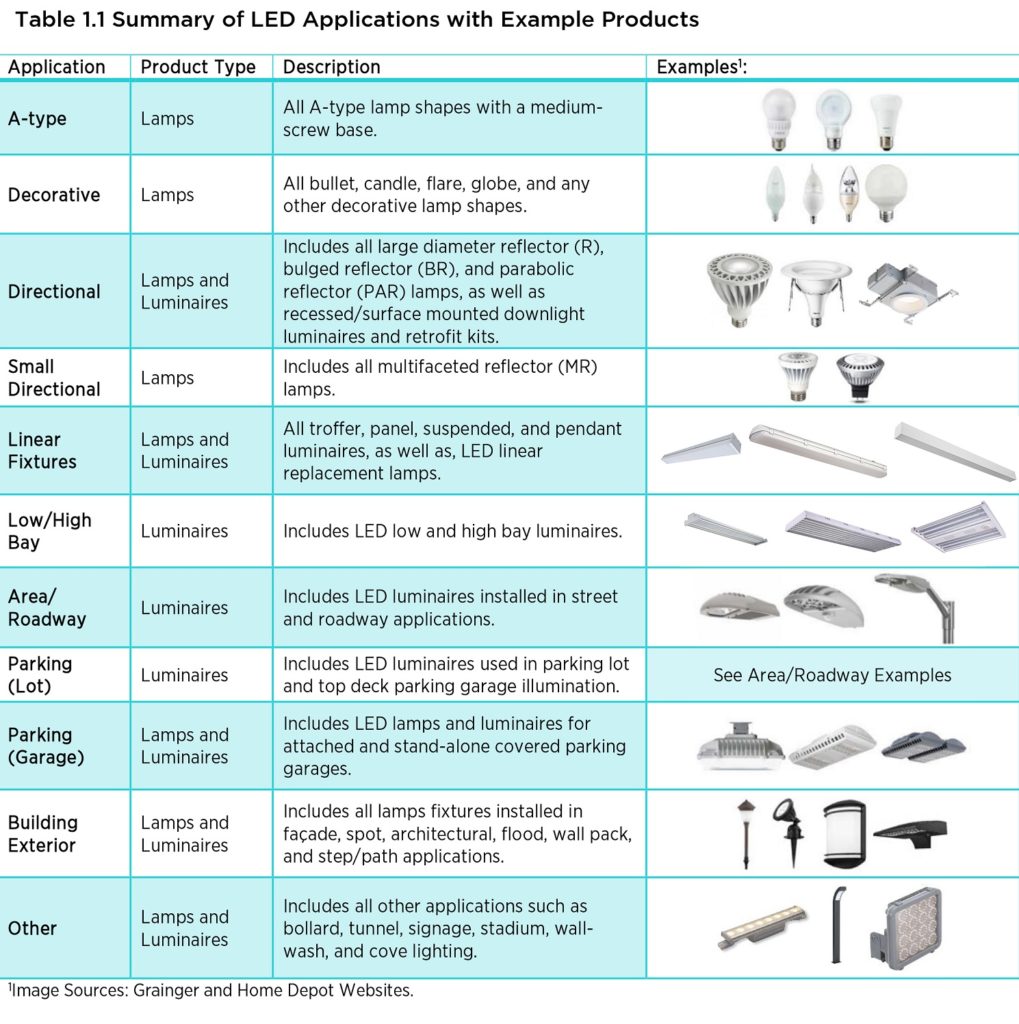