The requirement of the UV light is growing very fast as the ongoing pandemic of Coronavirus has rigorously affected worldwide. Here is a blog to introduce the UV and UV light.

Don’t have time to read? Download the E-book directly.

1. What is UV Radiation?

All radiation is a form of energy, most of which is invisible to the human eye. UV radiation is only one form of radiation and it is measured on a scientific scale called the electromagnetic (EM) spectrum..

UV radiation is only one type of EM energy you may be familiar with. Radio waves that transmit sound from a radio station’s tower to your stereo, or between cell phones; microwaves, like those that heat your food in a microwave oven; visible light that is emitted from the lights in your home; and X-rays like those used in hospital X-ray machines to capture images of the bones inside your body, are all forms of EM energy.

UV radiation is the portion of the EM spectrum between X-rays and visible light.

2. What is UV technology?

The UV technology is both the oldest and one of the very latest technologies used to disinfect fluids. The method is based on the natural disinfectant action of the sun’s rays. 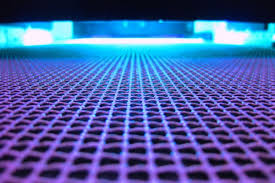 Ultraviolet (UV) light has shorter wavelengths than visible light. Although UV waves are invisible to the human eye, some insects, such as bumblebees, can see them. This is similar to how a dog can hear the sound of a whistle just outside the hearing range of humans.

Ultraviolet light is a type of electromagnetic radiation that makes black-light posters glow, and is responsible for summer tans — and sunburns. However, too much exposure to UV radiation is damaging to living tissue.
Electromagnetic radiation comes from the sun and transmitted in waves or particles at different wavelengths and frequencies. This broad range of wavelengths is known as the electromagnetic (EM) spectrum. The spectrum is generally divided into seven regions in order of decreasing wavelength and increasing energy and frequency. The common designations are radio waves,microwaves, infrared (IR), visible light, ultraviolet (UV), X-rays and gamma-rays.
Ultraviolet (UV) light falls in the range of the EM spectrum between visible light and X-rays. It has frequencies of about 8 × 1014 to 3 × 1016 cycles per second, or hertz (Hz), and wavelengths of about 380 nanometers (1.5 × 10−5 inches) to about 10 nm (4 × 10−7 inches). According to the U.S. Navy’s “Ultraviolet Radiation Guide,” UV is generally divided into three sub-bands: UVA, or near UV (315–400 nm), UVB or middle UV (280–315 nm), UVC, or far UV (180–280 nm)
The guide goes on to state, “Radiations with wavelengths from 10 nm to 180 nm are sometimes referred to as vacuum or extreme UV.” These wavelengths are blocked by air, and they only propagate in a vacuum. 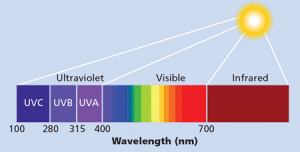 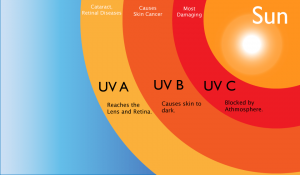 The Ultraviolet Index (UVI) is a rating scale, with numbers from 1 to 11, which indicate the amount of skin-damaging UV rays reaching the Earth’s surface during the day.

The daily UVI forecasts the amount of UV reaching your area at noon when the sun typically reaches its highest point in the sky. The higher the UVI number, the more intense the UV rays you will be exposed to.

Unlike chemical approaches to water disinfection, UV provides rapid, effective inactivation of microorganisms through a physical process. When bacteria, viruses and protozoa are exposed to the germicidal wavelengths of UV light, they are rendered incapable of reproducing and infecting. UV light has demonstrated efficacy against pathogenic organisms, including those responsible for cholera, polio, typhoid, hepatitis and other bacterial, viral and parasitic diseases. In addition, UV light (either alone or in conjunction with hydrogen peroxide) can destroy chemical contaminants such as pesticides, industrial solvents, and pharmaceuticals through a process called UV-oxidation. Microorganisms are inactivated by UV light as a result of damage to nucleic acids. The high energy associated with short wavelength UV energy, primarily at 254 nm, is absorbed by cellular RNA and DNA. This absorption of UV energy forms new bonds between adjacent nucleotides, creating double bonds or dimers. Dimerization of adjacent molecules, particularly thymine, is the most common photochemical damage. Formation of numerous thymine dimers in the DNA of bacteria and viruses prevents replication and inability to infect.

Ultraviolet (UV) lamps emit electromagnetic radiation with a wavelength between 10 nanometers (nm) and 400 nm, which is below the visible light spectrum. UV lamps have industrial uses in sterilization, geology, polymer and adhesive curing, and laboratory research and analysis, including biological analysis. UV lamps often use fluorescent sources, short-wave, and gas-discharge lamp.

The spectrum of ozone-free low-pressure lamps reduces itself to the range of 254nm. For this purpose, special quartz glass cuts off wave lengths shorter than 254nm.

8. How UV light kills the virus?

Ultraviolet (UV) light kills cells by damaging their DNA. The light initiates a reaction between two molecules of thymine, one of the bases that make up DNA. The resulting thymine dimer is very stable, but repair of this kind of DNA damage–usually by excising or removing the two bases and filling in the gaps with new nucleotides–is fairly efficient. Even so, it breaks down when the damage is extensive.

The longer the exposure to UV light, the more thymine dimers are formed in the DNA and the greater the risk of an incorrect repair or a “missed” dimer. If cellular processes are disrupted because of an incorrect repair or remaining damage, the cell cannot carry out its normal functions. At this point, there are two possibilities, depending on the extent and location of the damage. If the damage is not too extensive, cancerous or precancerous cells are created from healthy cells. If it is widespread, the cell will die.

Now, investigators from the Center for Radiological Research at Columbia University Irving Medical Center (CUIMC) believe they may have found a new, low-cost solution to eradicating airborne viruses in indoor public spaces. The research team found that continuous low doses of far ultraviolet C (far-UVC) light can kill airborne flu viruses without harming human tissues. The findings from the new study—published today in Scientific Reports in an article entitled “Far-UVC Light: A New Tool to Control the Spread of Airborne-Mediated Microbial Diseases”—suggests that use of overhead far-UVC light in hospitals, doctors’ offices, schools, airports, airplanes, and other public spaces could provide a powerful check on seasonal influenza epidemics, as well as influenza pandemics.

Scientists have known for decades that broad-spectrum UVC light, which has a wavelength of between 200 to 400 nanometers (nm), is highly effective at killing bacteria and viruses by destroying the molecular bonds that hold their DNA together. This conventional UV light is routinely used to decontaminate surgical equipment.

Interestingly, several years ago, Dr. Brenner and his colleagues hypothesized that a narrow spectrum of ultraviolet light called far-UVC could kill microbes without damaging healthy tissue. Moreover, the researchers demonstrated that far-UVC light was effective at killing MRSA (methicillin-resistant Staphylococcus aureus) bacteria, a common cause of surgical wound infections, but without harming human or mouse skin.

“Far-UVC light has a very limited range and cannot penetrate through the outer dead-cell layer of human skin or the tear layer in the eye, so it’s not a human health hazard,” Dr. Brenner noted. “But because viruses and bacteria are much smaller than human cells, far-UVC light can reach their DNA and kill them.”